UPDATED June 9: 16:51p - In an interview with TechCrunch, Eugene H. Spafford, a computer science professor at Purdue and a noted expert in computer security observed something interesting. He said: "The first is, in the last three days we’ve seen three highly classified bits of information that were at the center of stories broken by the Guardian in England, all involving highly classified U.S. documents. That indicates that there is potentially some very significant leak of someone who is violating their oath... I find the timing interesting that all of this is being released on the days that the president is meeting with the Chinese premier and the major topic of discussion was supposed to be the us complaining about surveillance and cyber attacks by the Chinese. One of the things in security is that there are no coincidences. So one can’t help but wonder if there isn’t some political motive, and who’s really behind this, if in fact there is a real story.”

He is right that there are no coincidences in security. And I think he's also right that there is a political motive. But I think he's wrong about someone violating their oath. Someone is being 'owned' instead. Looking at the fact that the Chinese are highly sophisticated in cyber-spying, that there are state-sponsored malware spying products that antivirus does not catch, and the date-coincidence of the release of this highly classified data, to me that the Chinese have installed malware on the PC of a very highly placed U.S. Government official (who probably was spear-phished), know everything top secret that is on this machine, and feed tidbits of this to the U.K. Guardian probably through a cut-out or two.

Generate a fabulous amount of controversy and uproar exactly at the time when China gets pulled on the mat for cyber spying. It's classic Sun Tzu as a matter of fact.

UPDATE! The plot thickens. It gets better, an actual CIA contractor who has since fled to Hong Kong is the source: NSA whistle-blower revealed: 29-year-old former CIA contractor says he felt compelled to leak.  And here is an interview with Edward Snowden!  www.guardian.co.uk/world/video/2013/jun/09/nsa-whistleblower-edward-snowden-interview-video 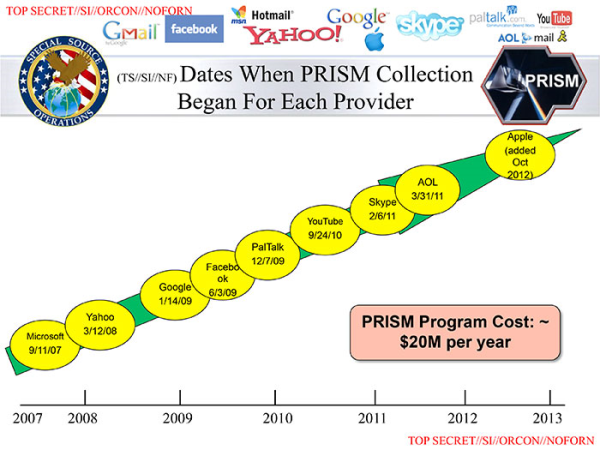