The most recent annual study from Javelin Strategy & Research 2013 Identity Fraud Report: Data Breaches Becoming a Treasure Trove for Fraudsters surveyed 48,200 respondents over the last 10 years, making it the longest-running independent analysis of U.S. identity fraud. "The correlation of being notified of a data breach and actually suffering a certain type of fraud is very, very strong," said Al Pascual, an analyst at Javelin and this report's lead researcher. "If you receive notification that your credit card number has been breached, the incidence rate for that particular population is 28 percent, when we talk about existing credit card fraud. For all consumers, it's only 3.1 percent. That's almost nine times greater. It's a pretty strong indicator that if you lose a credit card [in a breach], there's better than a one-in-four chance that you are going to become a victim of existing card fraud." 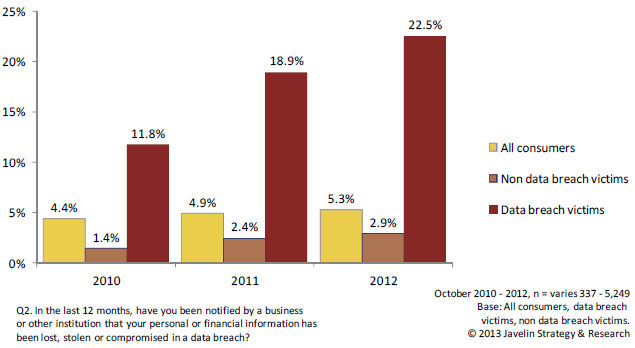 Some of the key findings in this year's report are alarming to say the least: 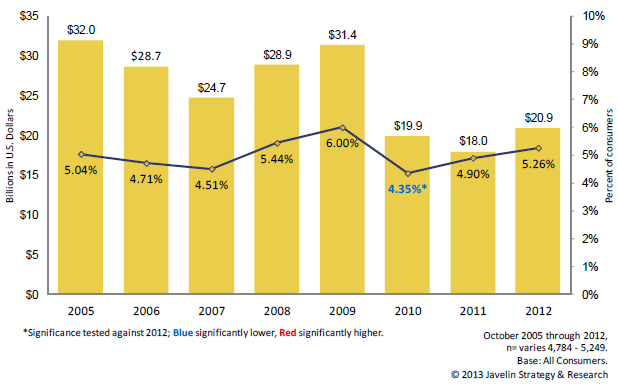 To get some perspective, here are how the numbers have changed since the 2012 Identity Fraud Report was published:

A few things to keep in mind to prevent this from happening to you are: taking it seriously when you're notified by your card company or financial institution (make sure you have all the fraud prevention measures available set up first!) monitor your accounts on a daily basis to keep an eye out for fraudulent activity and regular monitoring of your credit report. It is critical that financial institutions have a great customer awareness program in place to keep consumers informed about the latest trends in fraud and arm them with knowledge about how to keep themselves protected.

Data found in this report reinforces the importance of security awareness training in the business world to protect themselves as well as their consumers. It's also important to note hackers aren't just going afret large corporations like Amazon and Facebook, they will target ANY business with security vulnerabilities. Employees are the first line of defense against cybercrime.

91% of successful data breaches started with a spear-phishing attack

Find out how many employees in your organization are phish prone today!