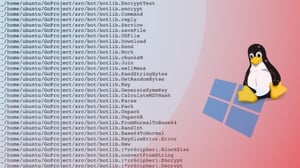 Here is the bad news:

According a report by JPCERT, the WellMess malware can operate on WinPE (Windows Preinstallation Environment) and on Linux via ELF (Executable and Linkable Format). The malware gives a remote attacker the ability to execute arbitrary commands as well as upload and download files, or run PowerShell scripts to automate tasks. The commands are transferred to the infected device via RC6 encrypted HTTP POST requests, with the results of executed commands transmitted to the C&C server via cookies.

While WellMess is far from the first malware to run on Linux systems, the perceived security of Linux distributions as not being a significant enough target for malware developers should no longer be considered the prevailing wisdom, as cross-compilation on Golang will ease malware development to an extent for attackers looking to target Linux desktop users. As with Windows and macOS, users of Linux on the desktop should install some type of antivirus software in order to protect against malware such as WellMess.

And of course step users through new-school security awareness training as your last line of defense.