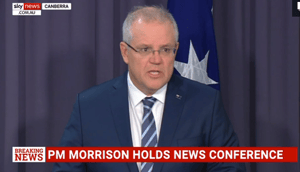 The NY Times reported some surprising numbers: "Officials promised to recruit at least 500 cyberspies and build on the country’s offensive capabilities to take the online battle overseas. Prime Minister Scott Morrison, seen in May, said that malicious cyberactivity undermined Australia’s economy and security.

SYDNEY, Australia — Confronting a surge of cyberattacks attributed to the Chinese government, Australia moved to bolster its defenses on Tuesday, promising to recruit at least 500 cyberspies and build on its ability to take the battle overseas.

The investment of 1.35 billion Australian dollars ($930 million) over the next decade is the largest the country has ever made in cyberweapons and defenses. It follows what Prime Minister Scott Morrison has described as a sharp increase in the frequency, scale and sophistication of online attacks — and, more broadly, a steady deterioration in relations between Australia and China.

The new initiative points to growing frustration in Australia with what current and former intelligence officials have described as a relentless, increasingly aggressive campaign by China to spy on, disrupt and threaten the country’s government, vital infrastructure and most important industries.

The full details of attacks that appear to have come from China are still mostly hidden — Australian officials remain wary of provoking Beijing by naming and shaming culprits — but the public record now includes several examples of elaborate hacking that has less to do with theft for profit than growing aggression against a rival government of the Australian Parliament. A year before that, security experts said that tools commonly used by Chinese hackers had been deployed in attacks on Australia’s Defense Department and the Australian National University.

Two weeks ago, Australian officials said a wide range of political and private-sector organizations had come under attack by a “sophisticated state-based cyberactor” — a reference that most cybersecurity experts took to mean China. And there are hints that the tools being deployed are increasingly ambitious and dangerous.

In one attack earlier this year, hackers used a compromised email account from the Indonesian Embassy in Australia to send a Word document to a staff member in the office of the top leader in the state of Western Australia." Phishing attacks are still the #1 way that state actors try to penetrate networks and you need to step your users through new-school security awareness training frequently.   Contact our office in Melbourne here: