A trio of wealthy Russians made an enemy of Russian President Vladimir Putin. Now they’re all dead.

The Wall Street Journal just came out with a rather chilling tale.

"Nikolai Glushkov—found strangled to death with a dog leash in March—had been the last survivor of three men, once rich and powerful, who helped build the political system that brought Mr. Putin to the presidency. But the trio fell out of favor and fled to England. There they tried to mount opposition to their former protégé, only to see their efforts disrupted by costly litigation—and untimely deaths." Here is the story,

Putin is ruthless in a variety of areas, including cyber warfare. Now, let's have a fresh look at the most recent American top five national security threats to and we find cybersecurity in the second slot. I'm pretty sure the list is almost the same for every western country.

The top five areas of concern that keep senior officials awake at night fall into the categories of critical infrastructure, cybersecurity, terrorism, border security, and drones. China, Iran, North Korea, and Russia are the countries with both the intent and capability to attack the U.S. in cyberspace. The Washington Examiner has more detail.

Now where are we most vulnerable, which verticals are looked at as soft targets? Adam Janofsky at the WSJ mentioned in their cybersecurity newsletter: "Corporate cybersecurity teams have few ways to measure their success and gauge how they compare to their peers. 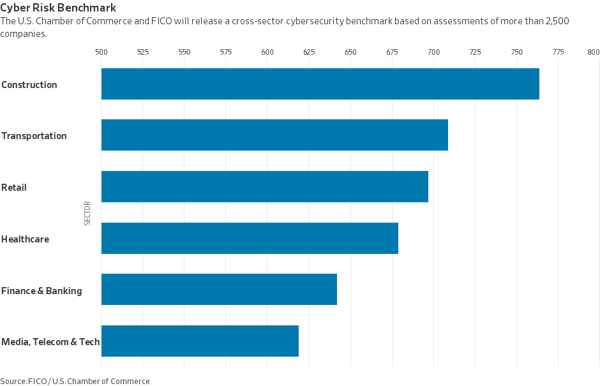 "On Thursday the U.S. Chamber of Commerce and Fair Isaac Corp., commonly referred to as FICO, are releasing a cross-sector cybersecurity benchmark aimed at quantifying how organizations and entire industries stack up to each other. The benchmark is based on FICO security assessments of more than 2,500 companies in a range of industries. FICO is best known for consumer credit scores. Its corporate cyber risk scores work in a similar way: Higher is better."

It would make sense to check that out. Here is their press release. However, this is pretty generic. if you want to know your very own organization's risk score over time, check out KnowBe4's brand new Virtual Risk Officer™ functionality.

Virtual Risk Officer (VRO) provides insight and actionable metrics that will allow you to understand the attack surface of your organization, and learn what users might be more vulnerable to a phishing attack. VRO provides dynamic risk scores, assigned to users, groups, and your organization as a whole, which enable you to make data-driven decisions when it comes to your security awareness plan and understand what users are the most susceptible to a phishing attack. You can even use Smart Group conditional statements that will allow selection based on individual risk scores. To see a quick video overview of VRO, click here.

Find out how affordable this is for your organization. Get a quote now.