A New Strain of Tech Support Scam in the U.K. 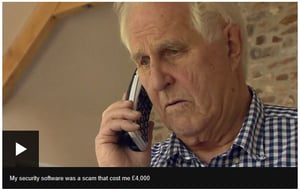 The BBC reports a tech support scam that caused a British man, Doug Varey, to lose £4,000. The scam began when Mr. Varey saw an online ad for twelve years’ worth of computer security protection for £556. It sounded like a good deal, so he signed up.

Several months later, someone called him at his house. The caller said they were from the computer security company, and told Varey that his computer had been hacked by a man in Russia. He looked at his computer and saw a video of a man buying guns, ammunition, and hand grenades online. The caller began intentionally trying to stress Varey out.

“This chap said ‘Oh my God, oh my God, this is worse than I thought,’” Varey explained. “And he was increasing my level of anxiety to the point where I was panicking.”

The caller told Varey that the problem could only be fixed if he paid £4,000 for advanced security. Varey said at that point he just wanted the problem to go away, so he paid the money. He didn’t realize it was a scam for several weeks.

These social engineering scams are very common, and the UK Police’s Action Fraud receives more than 2,000 reports of tech support scams every month. Fortunately, in this case, some of the scammers were brought to justice. The BBC says Mr. Varey’s case provided evidence that assisted in an international law enforcement operation involving British and Indian police forces, with cooperation from Microsoft. Two call centers in Kolkata were shut down and seven people were arrested.

Tech support scams are successful when people don’t know how to spot them. New-school security awareness training can teach your employees how to verify the legitimacy of services on the Internet. The BBC has the full story: https://www.bbc.com/news/technology-50117796