8-Character Windows NTLM Passwords Can Be Cracked In Under 2.5 Hours

"Current password cracking benchmarks show that the minimum eight character password, no matter how complex, can be cracked in less than 2.5 hours" using a hardware rig that utilizes eight Nvidia GTX 2080Ti GPUs, explained a hacker who goes by the pseudonym Tinker on Twitter in a DM conversation with The Register. "The eight character password is dead." From the report: It's dead at least in the context of hacking attacks on organizations that rely on Windows and Active Directory.

NTLM is an old Microsoft authentication protocol that has since been replaced with Kerberos. According to Tinker, it's still used for storing Windows passwords locally or in the NTDS.dit file in Active Directory Domain Controllers.

Tinker estimates that buying the GPU power described would require about $10,000; others have claimed the necessary computer power to crack an eight-character NTLM password hash can be rented in Amazon's cloud for just $25.

NIST's latest guidelines say passwords should be at least eight characters long. Some online service providers don't even demand that much. When security researcher Troy Hunt examined the minimum password lengths at various websites last year, he found that while Google, Microsoft and Yahoo set the bar at eight, Facebook, LinkedIn and Twitter only required six.

Tinker said the eight character password was used as a benchmark because it's what many organizations recommend as the minimum password length and many corporate IT policies reflect that guidance. So how long is long enough to sleep soundly until the next technical advance changes everything?

Tinker recommends a random five-word passphrase, something along the lines of the four-word example popularized by online comic XKCD.That or whatever maximum length random password via a password management app, with two-factor authentication enabled in either case.

That is by the way exactly what KnowBe4's Chief Hacking Officer Kevin Mitnick has been saying for the last few years now. Train your employees to create a short passphrase that take years to crack. 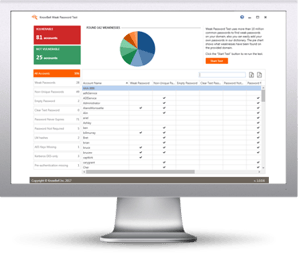 Reports on the accounts that are affected