Brand new data from Verizon shows businesses sacrificed when it comes to mobile security; a decision that caused compromises with impacts well-beyond just a simple breach.

With so many possible attack vectors for IT to protect against, often times IT needs to cut corners in the name of simply “getting the job done.” According to Verizon’s newly released 2020 Mobile Security Index, 43 percent of organizations felt they sacrificed mobile security for reasons of speed, convenience, profitability, budget constraints, and lack of expertise. Despite this segment of organizations being lower than last year (48% in 2019), the percentage of organizations suffering a security compromise from their mobile and IoT devices increased 18 percent year-over-year (from 33 percent of organizations in 2019 to 39 percent in 2020).

These attacks weren’t minimally impactful either; according to Verizon, of those organizations suffering an attack, nearly two-thirds (66%) considered the compromise to have major impacts:

So, where’s this all coming from? How are these bad guys getting in?

The user’s oh-so-trusted mobile device increases their sense of security and lowers their sense of vigilance. And it’s not just email – in fact, it’s mostly not email that is the source of mobile phishing. 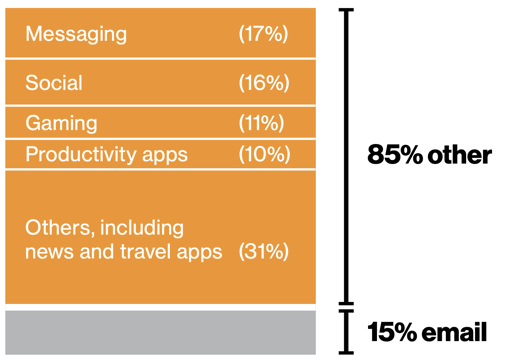 According to Verizon, 85% of mobile phishing comes from messaging, social networks, gaming, and other apps – with only 15% of attacks coming from email.

Your users need to be taught that anytime a device with access to any corporate resources is being used, they need to be security-minded. This can be achieved using continual Security Awareness Training, which teaches employees about the kinds of attacks, social engineering scams, and methods of trickery that are used to con them into engaging with malicious links and attachments.

Mobile looks to be a growing security concern – and the reason is your users.